The 2014 Mercedes-Benz B-Class Electric Drive which shown as a concept car last year at Paris now finally has made its debut, in production trim, at the 2013 New York Auto Show, and it is set to be officially launched first in the USA at the beginning of 2014.

The B-Class Electric Drive is the Mercedes-Benz’s first battery-electric car. It based on the Mercedes-Benz B-Class gasoline/ diesel version which exclusively made for European market, but it sports a new electric motor powered by a 28 kWh lithium-ion battery – which is located under the floor – insted of B-Class’s petrol or diesel engine.

The B-Class Electric Drive’s new electric motor generates 134 horsepower and 229 lb-ft. of torque, with a range of 115 miles (185 km), and allowing the 5-door electric hatch to accelerate from zero to 60 mph in 10 seconds before reaching a top speed of 100 mph. Mercedes has teamed up with Tesla Motors to create this amazing powertrain.

Its lithium-ion battery pack can be recharged at any standard household power socket. In the USA, the charging time for a range of 60 miles is less than two hours using a 240-volt, Level 2 charger, and it can be checked and configured via the Internet – the Vehicle Homepage. 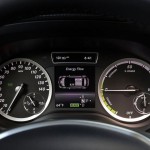